Cinnamon Spice and All Things Nice 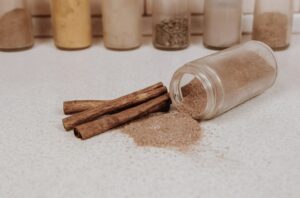 Cinnamon is a warm, sweet spice that comes from the bark of a tree (Laurel family) native to Sri Lanka. Cassia is another variety native to China. The bark is removed, dried, and rolled up to make a tube. Cinnamon is sold dry as sticks and ground as a powder.  It is one of the oldest spices known to us and offers many health and nutritional benefits. Cinnamon is also used to awaken many of our Christmas dishes and provides a sense of warmth during the winter months.

For centuries, Cinnamon has been used as an antiseptic, helping to fight off infections, and has traditionally been used to help in the recovery from colds, sore throats, headaches, fevers, and flu. It is rich in antioxidants which provide an anti-inflammatory effect and is digestive aid as it is linked to helping normalise levels of glucose and certain fats in the blood (triglycerides), reducing the risk of diabetes and heart disease.

What are the health benefits of cinnamon?

Preliminary research suggests that Cinnamon may also help jump-start irregular menstrual cycles in women affected by Poly Cystic Ovary Syndrome (PCOS). Polycystic ovary syndrome, which involves many of the body’s systems, is thought to be heavily linked to the insensitivity of Insulin. It is not yet clear exactly why cinnamon may work to regulate menstrual cycles in those with polycystic ovary syndrome, but it may improve the body’s ability to process glucose and insulin. In research involving diabetic patients, it has been shown to reduce insulin resistance in people with diabetes. A small study conducted by researchers from Columbia University Medical Centre in New York City found that women with polycystic ovary syndrome who took low-cost daily 1,500-milligram cinnamon supplements had about twice the menstrual cycles over a six-month period compared to women with PCOS who were given a placebo. Further research is required.

Cinnamon sticks will retain their aroma and flavour for a year, whilst ground cinnamon for six months. Enjoy as Cinnamon toast, with porridge, in desserts, in drinks such as mulled wine or hot chocolate, in curries, with milk and honey. It is also very nice in relishes, pickles, stews, and stuffing. Cinnamon also pairs up well with oranges, pears, and apples.

Preheat the grill, cut the oranges in half and cut the segments slightly loose in the orange halves using a sharp knife. Place into an oven-proof dish and sprinkle the cinnamon and sugar over the top of the oranges. Place under the grill for up to 5 minutes (or until there is bubbling on the top!). Serve and enjoy!

In a saucepan, heat the milk until it begins to bubble. Add the oats and allow cook for 5mins or until the milk has been absorbed.

In a separate pan, add the honey and apple on low heat and allow to soften and caramelise for a few minutes.

Spoon the porridge into two bowls and top with the apples. Sprinkle a little extra cinnamon on top and serve.

Roussell et al.,(2009). Antioxidant effects of a cinnamon extract in people with impaired fasting glucose that are overweight or obese. )28(1):16-21.

Sue is a Nutritional Therapist specialising in fertility, women’s health and general wellness. She is the nutritionist for IVF Babble, IVF Babble Africa and Emme Magazine. There are lots of recipes and nutrition articles over on IVF Babble written by Sue in the wellness section- https://prime.ivfbabble.com/nutrition-recipes/

Sue is able to offer remote Nutritional Therapy consultations. If you would like more information, do take a look at her website www.suebedfordnutrition.co.uk or send her an email sbnutrition@btinternet.com